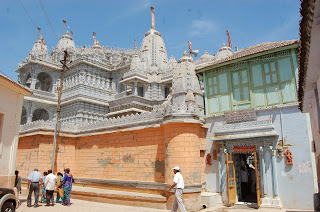 History of the temple

The temple was built in 1918 on the 13th day of Magha. It was built by three persons Shah Velji Malu, Shah Keshavji Nayak, Shivji Nensi, and Osval Vanias. The temple was built by the Mistris of Kutch under the oversight of Salat Nathu of Sabhrai. The Shantinath idols are situated by Acharya Ratna Sagar Suri of Achal Gaccha. In the acclaimed sonnet 'Keshavji Nayak' this temple was contrasted with Meru Prabha temple. The temple is encircled by a high fort with five cells and 12 by 6 feet. Through an extremely rich two-storied entrance gate, an external yard encompassed by structures set apart for the utilization of ministers opens into a walled quadrangle with a hallowed place in each divider. In the middle point of the quadrangle, on a 6 feet 9 inches plinth reached by 15 steps, is the temple, stages 78 feet in length 69 wide and 731/2 high, upheld on three sides by rich two-storied domed porches. The hall, mandapa ascends in two stories, and over the place of worship is a tower with lavishly cut figure specialties and mouldings.

The Shantinath Jain temple is located in Kothara, Kutch district, Gujarat. The main deity in the temple is Shantinath. Inside, the hall, mandap, encompassed by paths or verandahs, with a luxuriously planned asphalt of various hued marbles, has 22 pilasters, and 16 columns, and a vault upheld on eight columns with beautifully curved swaggers. The primarily shaped of 20 columns lavishly cut with blossoms, leaves and creepers is the hallowed where upheld on one or the other side by seven little figures, is an enormous picture of Shantinath in padmasana pose with a brilliant crown sitting on a luxuriously cut marble seat. The upper story of the hill, reached by stone strides from the south-west yards, has a passageway with rich alters each containing a huge marble sitting picture. The main deity of this temple is a 90 cm high, white-shaded icon of Shantinatha in Padmasana posture. Under the lobby there is an underground sanctum with around 25 enormous white marble figures with valuable stones let into the eyes, chests, and arms. Besides the underground hallowed place, there is a bhonyra particularly set up against a period of trouble.

Road: Buses & taxis are available from Bhuj station. The bus depot at Khothara is just 400 meters away from the temple. Pilgrims has to pass through this place to reach Suthari Teerth, 12 kms from here. Totally 47 buses reaches here from different places.